skip to main | skip to sidebar

The witch is done! 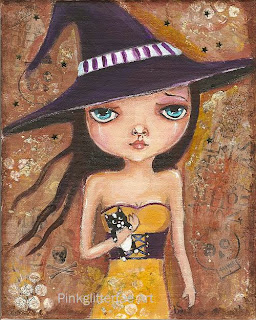 Here is the (almost) finished witch painting that I showed you in my last blog post. I say 'almost' because I like to go back in after a day or so, and add more little details. I need to lighen up, lol!
I went back over my blog because I couldn't remember the last actual painting I did....it was in June! Wow, I went that long without painting my whimsical girls!  I need to make sure that doesn't happen again.
The background gave me trouble when I started, but after a while, it seemed to flow. So much for keeping it simple, I started adding layers for some interest.  The secret is to just paint, and let it go where it wants to, and mostly, don't stress about it.  There is no right or wrong way to do art, and even if you make mistakes, you simply learn from them, and apply what you have learned the next time.
I'm looking forward to my next painting now, maybe I can get into some kind of groove, and not go another 3 months!

The last couple of days we have had some insane weather. Yesterday they were calling for a 'weather bomb', which I have never heard of. For us we had  the craziest winds  and they've lasted so far for 2 days.
According to the news it hit lots of areas hard, especially in the US.
Were any of you affected?  I'm surprised at the intensity, and how much area it has covered. Makes me think that we are in for a hell of a winter.

thanks for reading!
Posted by pinkglitterfae at 8:06 PM 20 comments:

New ACEO and a Witch WIP 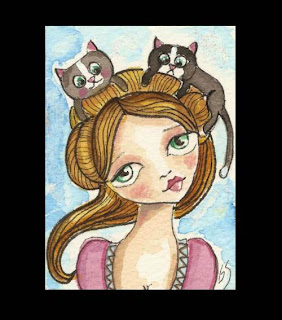 hi everyone, I've been busy creating lots of ACEOs. After doing my whimsical owls, I felt like drawing one of my girls, and stuck some kittens in there as well.  It seems like I have done so many of these miniature paintings, that my larger work has suffered. It's been probably months since I painted an actual canvas. I think about it, then I postpone doing it, waiting for the perfect time. I guess since these ACEOs are only the size of a playing card, they are easier to find time to do. 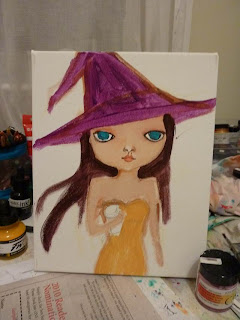 However enough is enough. Today I made myself get out a canvas and start a witch painting that I said I would do. Drawing the girl is no problem so far. It's deciding what to do with the background that always gets me. That was my problem with my older paintings, I just didn't know what to do. So, I will keep it simple this time. I am adding rust colors in the background for now, and see what happens. I can't believe a simple painting is causing me such stress, lol! 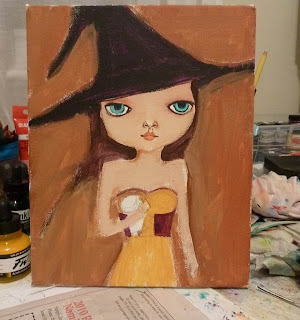 You would think with all the mixed media workshops I have done, this would finally get easy, but that's not the case.
I hear thunder in the distance, so I'm heading out to the grocery store and pick up some ju jubes. Maybe when I come back, I can be more clear about what to do next....
***************
ps- for those of you wondering how Henry the rescue cat is from last week's blog, he is still hanging in there. He was able to eat himself for the first time, and they will be taking more blood work to see if he is getting better.
Posted by pinkglitterfae at 4:50 PM 15 comments: 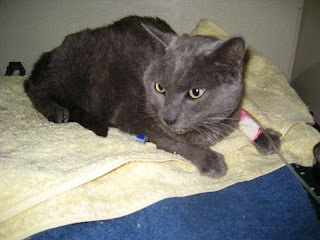 This is Henry. Henry is an 8 year old rescue cat, and he is now in an animal hospital fighting for his life.
Briefly this is his story:  he and 5 other cats belonged to a woman who got a new boyfriend. The boyfriend decided he didn't want the cats in the house so she dumped all  of them outside to fend for themselves for a couple of months, then gave them over to a cat rescue.  This is where my friend got involved. She took them to a barn, hoping to turn them into barn cats. After a few weeks, only 2 cats remained, the other 4 have moved on.

Last week I got a call from  my friend asking me to come with her to the animal hospital, sit in the back, and comfort Henry, who she found with his back legs paralized. The trip had me worried as he kept putting his head down. I thought he would die in the car. When the vet saw him, she told us he had been attacked by something. He had over 20 puncture wounds and was in bad shape.

It sounded like he was on the mend until today, I got an email saying his blood tests came back, and it looked like his kidneys were shutting down. My friend headed over there to be with him when he would be euthanized. She later sent an email  saying  that when they got there he perked up, and started purring.  I guess he only wanted to feel loved,  like every other living creature. So now we are waiting to see if this poor little guy makes it. He's had such a tough life, he doesn't deserve to go this way.
If he does survive, he will be an indoor cat once again.

I know alot of you  rescue cats or other animals, and I applaud you for your kindness and strength.
Thank goodness for people that take in unwanted animals, and try to give them a new chance at life.
Many times it works out beautifully, and you have a companion for life, but other times there is tragedy.
I sure hope this is not one of the latter.
***********

What a busy month it's been! I still haven't painted anything larger than an ACEO for a while. I've got a witch planned, it's just hard to find the time to do it. I'm one of these people that needs to work on something until it's done. Pretty soon Halloween will be upon us, and as soon as that's over, I start Christmas decorating.
Shhh, don't tell anyone but I played some Christmas music today while I was painting :-) 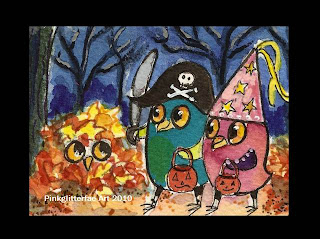 The above ACEO is called 'Ready to pounce'. Note the owl hiding in the pile of leaves, getting ready to scare the living daylights out of these trick r treaters.
Posted by pinkglitterfae at 8:05 PM 16 comments: 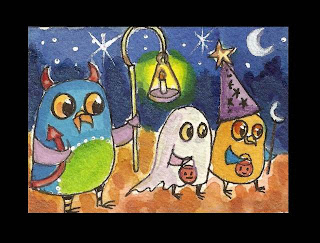 It's Halloween night, and two baby owls fearlessly move through the forest beneath the candle light.

Hello Friends. I really wanted to illustrate this week's topic, and had a mermaid in mind, but alas, I was afraid I would run out of time. So here is an ACEO I just finished today which fits the topic perfectly I think.

It's now official, I am a terrible blogger. I keep meaning to update, but when I get here I feel there's nothing interesting to say. I'm still reading my favorite blogs, just not updating my own, lol! 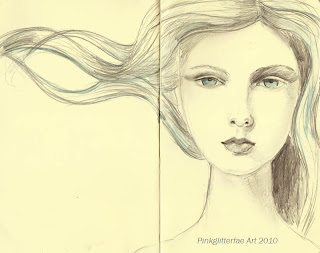 The above sketch is what I was hoping to add to Illustration Friday, she is  a mermaid, but she is not done yet. I pictured in my mind a murky background, with her face obscured with color, but not sure when I can get to it. So many other things to do.

Today I started decorating for Halloween. I brought out my skeleton and ghost tealights, and a pumpking which lights up when you plug it in.. There is fall garland, and lots of seasonal candles for display. Can't forget the purple and orange lights!
In one month, the Halloween stuff gets put away, and I start preparing for my favorite holiday of all, Christmas! Would you think I was strange if I admited that I played Christmas music yesterday, haha! I stopped after 2 songs, I didn't want to get sick of them already :-)

Coming soon will be some witch paintings for Halloween.
Thanks for putting up with this absent blogger (yup, that's me).
xoxo
Posted by pinkglitterfae at 8:37 PM 21 comments:

Welcome to my Blog

pinkglitterfae
Welcome to my little blog! My name is Betty,(or Pink, as people like to call me...) here you will find musings on art, life, and anything else that may come up. I hope to inspire, and encourage people to live out their best life!

Nutrition Can Save America!