skip to main | skip to sidebar

It's here! the One World One Heart Blogging Event. 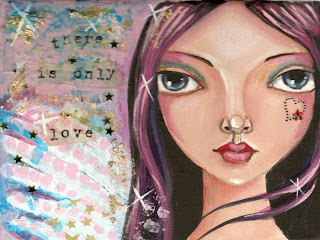 hello everyone! this is an exciting day. It is the 5th and final One World One Heart event, an idea brought to life by the wonderful Lisa Swifka.
This is an event for bloggers worldwide, in which we get to visit new blogs, make new friends, and even have a chance to win a prize.  This is my third time participating in this annual event where I have discovered many new blogs and met some fantastically creative people.

I will be drawing two winners  for my giveaway.  The first prize will be for the original mixed media angel painting you see on the top of this post (size: 6" x 8" canvas)  (15 x 20 cms).
The second prize will be for your choice of any print from my Etsy Shop.

For those who don't know me, I am a self taught artist who likes to create all kinds of whimsical art including ACEOs, angels, mermaids, and big eyed girls.

How to enter my giveaway

In order to have a chance to win, all you have to do is have a blog, and leave a comment on this post. Very easy, right?
The giveaway ends on February 17th, and I will use a Random Number generator to pick the winners.
I will announce the winner on my blog, as well as contact them.

For more information, and for a list of all participants,  please go to the OWOH blog, and enjoy your trip around the world! 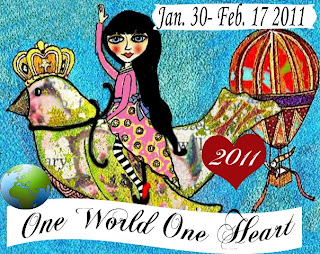 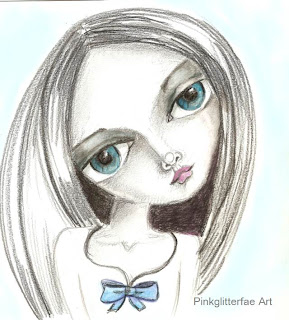 It's been so cold the last few days! This morning when I left for work, the temperature was -24 C (-11F). By the time I got to my building my fingers were so frozen it was difficult getting my keys out. lol! Seems a lot of you bloggers are in the midst of the same weather pattern from what I've read :-)

This past week I've been in a rut. With Valentine's Day coming I was hoping to make more ACEOs of my whimsical owls to sell, but everything I touched  turned to crap! What do you do when you just can't get it right? I've done hundreds of owl ACEOs, but nothing was working last week. At least 6 or 7 were thrown out, after spending so much time to get them right. That's not including the many drawings that just weren't working.  It's frustrating, I feel like a beginner, lol!

So I got out my sketchbook and worked on my faces.  I've neglected my girls, and it's time to bring them to life again. The above was drawn on good quality paper, she is not done yet, but once I finish,, she may find her way into my Etsy shop.

I finally got out my Pan Pastels to try on the background. They are fabulous! They are a nice creamy pastel, which you add with an applicator that looks like a makeup sponge, and I can't believe they'd been sitting on my shelf for months before I finally opened one up. You can't see it well in the picture above, but they truly give such wonderful, soft color. Remember, this is the year to pull out all your good supplies, and stop saving them for when you are a 'better' artist.

I have a question for anyone who draws on paper with pencil, do you spray your finished work? I know pencil smudges, but spraying it makes me nervous. I've gotten spotted results before...there must be a better way.

thanks for reading, and stay warm :-D
Posted by pinkglitterfae at 7:37 PM 21 comments: 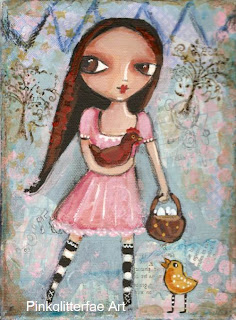 There once was a little girl, who loved animals so much! One summer, she went with her family to grandma's farm. Grandma had recently gotten four new chickens, but they had yet to lay any eggs. She said to the little girl's mother, "if they don't start laying soon, they're going to become our dinner". Well, this would certainly not do! thought the little girl. I have to do something to save the chickens!

So she devised a little plan. Every morning, she would sneak some eggs from the house to the barn, then she would come running inside saying 'look what I found!'.
Mother and grandmother were pleasantly surprised that the chickens started earning their keep.
This went on for a few days.  How strange though,  that the amount of eggs  in the bowl on the table never seemed to increase, considering 3 or 4 new eggs would be brought out from the barn.

Ahhh, finally the women got wise to the trickery of the little girl!
So were the chickens safe? well, they were while the little girl was there. She would throw a crying fit if anyone even mentioned having them for dinner. What happened after she went back home? who knows, but at least for a few weeks, they were safe......

and that my friends, is the basis of my Illustration Friday painting, called 'Save the chickens'. I know it's Thursday, but I had to get it finished before the deadline. As soon as I heard this week's theme, I knew I had to illustrate it.
Oh, and the above story is true, I'm sure you know who the little girl was, lol!

thanks for reading
xoxo
Posted by pinkglitterfae at 4:41 PM 22 comments: 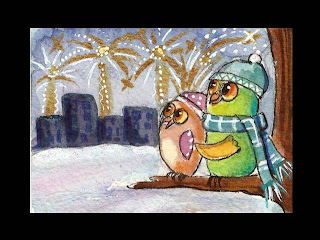 hi everyone, I just finished this ACEO for the ACEO Challenge blog. This month's challenge is 'fireworks'. It's fun and lighthearted, and anyone can join in. I've missed every single month, and was determined to finally get something in there, lol!
Last month's topic was the Northern Lights, which I really wanted to illustrate. I was so proud of myself after finishing my entry, then when I went to add it, I saw that it was too late and we were voting, lol!

hope you are all doing well, lots of crazy weather going on in the world. Please stay safe :-)
Posted by pinkglitterfae at 7:03 PM 17 comments: 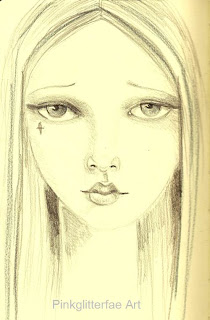 After work, I happened to catch the Oprah show. They were re-visiting teen heartthrobs, hers was Michael Jackson's big brother Jackie. You should have seen her face when he showed up in her dressing room unexpected.  I think I would have passed out if one of my teen idols showed up, lol!

I was a child of the 70's.  I had pictures on my bedroom wall of David and Shaun Cassidy, Leif Garret, Robbie Benson, John Travolta, and I was absolutely in love with the Bay City Rollers, haha! I would spend hours listening to their music, reading about them, dreaming about them, like any typical teen I suppose.

Oprah had Shaun Cassidy and Peter Frampton on the show as well as the Backstreet Boys.
Watching some of the older women in the crowd go crazy when Shaun Cassidy came on the stage was so beautiful, because in that  moment, I could see their younger selves. I could see the girls they used to be before family and responsibilities changed them. That youthful spark though, was still inside.

I totally get it now. When I see young girls screaming over Justin Bieber, I get it. That was me, many decades ago. Maybe it's a rite of passage for girls? I don't know.

Man, aging is tough! Seeing your teen hearthrobs age is tough, but it's worse seeing what time has done to you.  I still remember those days when I was young and hopeful, and full of dreams. It felt like a more innocent time, but maybe I'm just feeling nostalgic. Sometimes I wish I could go back just for a day, to experience a different world, a world without cell phones, internet, texting, video games...a world where we spent time outside, when we could go downtown without parents worrying about us.  A world with cute boys like Shaun Cassidy who we could dream about.

I'd love to hear about your childhood crushes, don't be shy! Who's poster was hanging up in your locker, lol?
Posted by pinkglitterfae at 7:20 PM 21 comments: 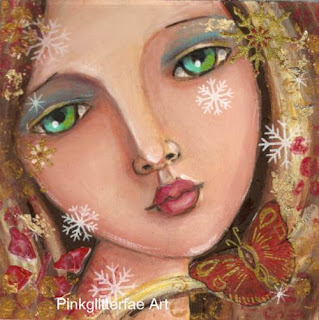 hello everyone, Happy New Year! It is my wish that 2011 brings you all everything your heart desires. I wish you much prosperity, perfect health, happiness, and unconditional love. May 2011 be the best year ever!

Is anyone making any New Year's resolutions? I haven't thought about it too much, since I tend to break every  one I make, lol!
However, just because you break your resolutions, doesn't mean you have failed. In fact, every day you wake up you have another opportunity to make any change you choose. So what if you eat a big piece of cheesecake when you said you were dieting? Tomorrow, you simply try again.
I like this gentle approach to change.  If we don't forgive ourselves when we fall down, who will?

This is a good time to reflect on 2010.  What I did was take a sheet of paper, write down all the wonderful things that have happened, and all the things I am grateful for. It was not a perfect year, as I did not exercise regularly, nor did I cut out sugar.  However, tomorrow morning is a fresh start, and another chance to make the changes that will improve my life.
How about you?
Posted by pinkglitterfae at 9:27 PM 19 comments:

Welcome to my Blog

pinkglitterfae
Welcome to my little blog! My name is Betty,(or Pink, as people like to call me...) here you will find musings on art, life, and anything else that may come up. I hope to inspire, and encourage people to live out their best life!

Nutrition Can Save America!